Two neural networks fighting each other in a zero-sum game. The generative adversarial networks are among the most interesting novelty in the field of machine learning.

A Generative Adversarial Network (GAN), is an artificial intelligence algorithm used in unsupervised machine learning. Its unique feature is the use of two distinct neural networks that challenge each other in a zero-sum game.

Why are adversarial generative networks one of the most interesting innovations of artificial intelligence in the last ten years? In the previous article of this series, we have dealt with the basic concepts of deep learning, explaining how a generic artificial neural network works. The artificial neural networks have made significant progress, they are already able to recognize objects and voices better than humans. Much progress has also been made with natural language.

But if on a hand the recognition is a field of extreme interest, the results are even more surprising if we start talking about the synthesis of images (that is creating images), videos and voices.

The Generative Adversarial Networks are a type of neural network in which research is flourishing. The idea is quite new, introduced by Ian Goodfellow and colleagues at the University of Montreal in 2014. The article, entitled “Generative Adversarial Nets”, illustrates an architecture in which two neural networks were competing in a zero-sum game. 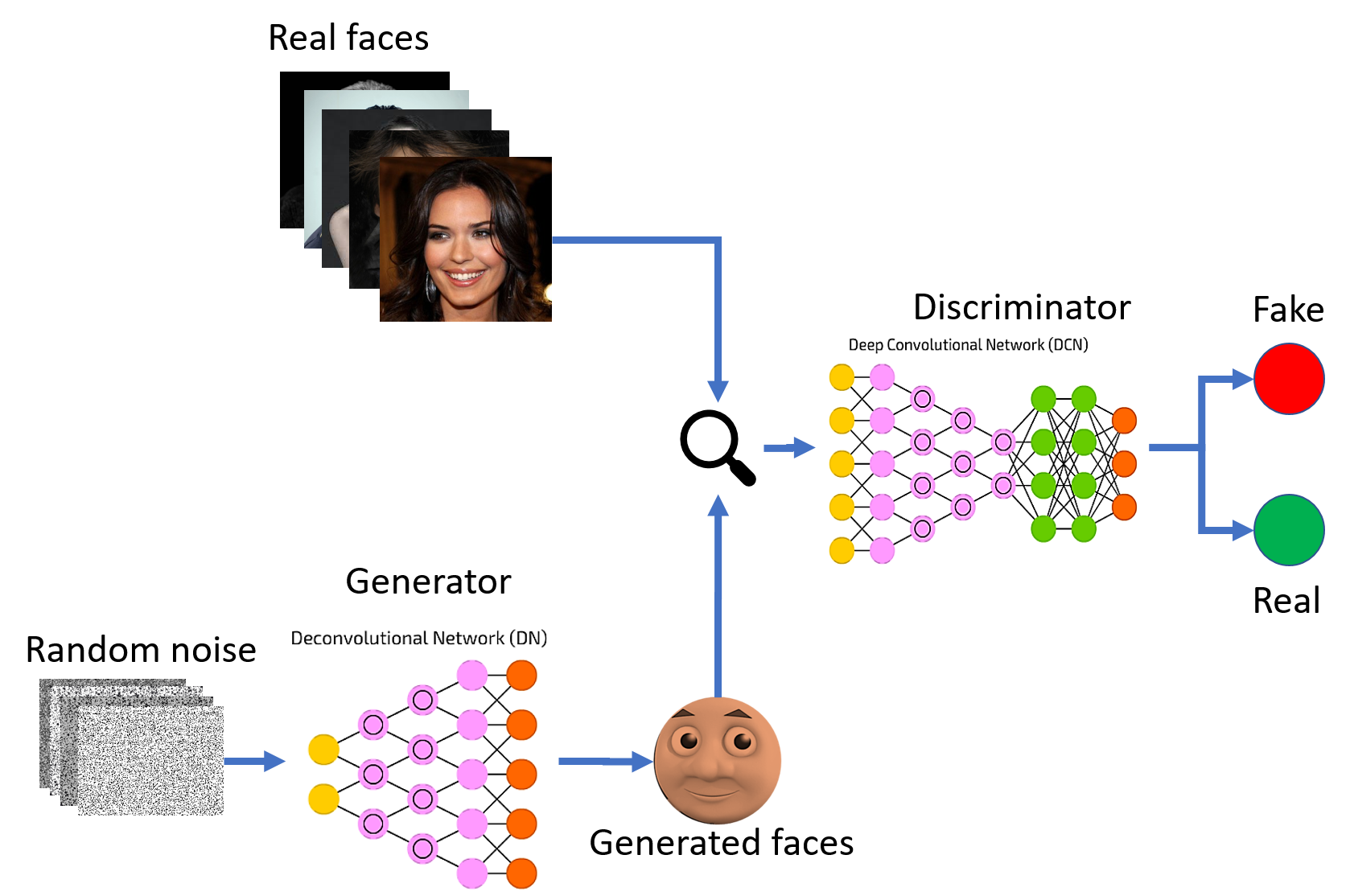 Before training the generative adversarial network, the discriminator is initially trained separately, until it can recognize real faces with a satisfactory degree of precision. The final goal of the discriminator will be to distinguish whether a given image is of a real or artificial face, that is to “beat” the generator by spotting the fakes.

The generator, on the other hand, is a deconvolutional network[3], which takes random noise in input and tries to generate images through interpolation. The final goal is to generate realistic images, able to “cheat” the discriminator, producing faces that are more and more indistinguishable from the real ones.

Once the generative antagonist network is assembled, the images created by the generator will be the input of the discriminator.

This process continues until the images produced by the generator and the discriminator’s judgments reach a point of equilibrium. In practice, the two neural networks compete by “training” each other.

The results can be astonishing, as you can see in the video below, where the whole scene, including the horse, is completely transformed in real time.

GANs have by now applications in almost every field.

One of the most popular applications of the generative adversarial network is image synthesis. such as generating animal images, for example by turning zebras into horses.

This kind of application (known as style transfer) allows us to completely change the graphics style, for example, recreate a photo with a Van Gogh-like style, or even with other photos’ style!

The conversion of text descriptions into images is another field where GANs are producing extremely interesting results, to the point of generating photorealistic images. Also promising the results of the GANs on the generation of videos with labial synchronization, as shown in the video below produced by Klingemann with Alternative Face.

The recovery of the details of videos and images, until yesterday obtained only with manual work, today seems to be headed towards automation.

Below is an example of image denoise.

Below a GAN used to restore a video by eliminating dominant and haze from underwater videos.

[1] We will deepen the concept of ConvNet in a subsequent article.

[2] The generalization serves to make the recognition more robust to noise such as noise and rotations/translations.

[3] The term “deconvolutional” in this area is strongly debated, and not all agree. For an in-depth discussion of deconvolution in neural networks, we can refer to the excellent article by Wenzhe Shi and colleagues.

Is the deconvolution layer the same as a convolutional layer?

Could 3D GAN Be the Next Step Forward for Faster 3D Modeling? [3dprinting.com]